The summer holiday is a perfect time to explore one’s area and discover new places. As this region is famous for the numerous and significant battles that were fought during World war One, a number of memorials have been erected as a tribute to the soldiers who crossed seas and oceans to fight for our freedom. 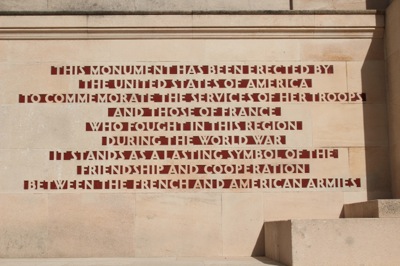 The American Memorial in Château-Thierry is an impressive monument situated upon a hill near the town of Château-Thierry. It offers a wide view of the valley of the Marne River and is located about 54 miles (87 km) east of Paris. It was designed by Paul Philippe Cret and built in the 1930s. It is managed by the American Battle Monuments Commission.

It commemorates the achievements of the United States forces that fought in the region during World War One when in 1918, the 2nd and 3rd United States Infantry Divisions took part in heavy fighting around the area during the Second Battle of the Marne. The monument consists of an impressive double colonnade rising above a long terrace.

On its east facade, you can see the Great Eagle above a map showing American military operations in this region, an orientation table pointing out the significant battle sites as well as the names of the troops involved. 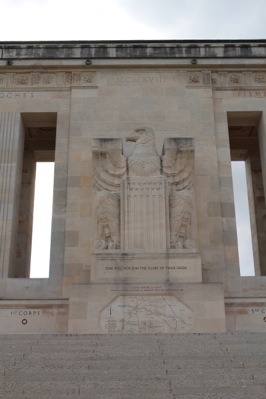 On its west facade are heroic sculptured figures representing the United States and France. Can you tell which is which? 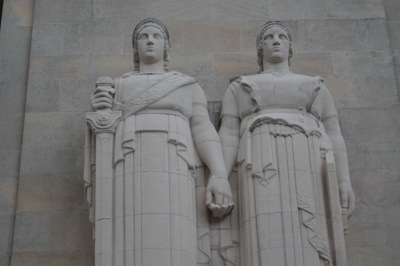 Christian, Muslim and Jewish graves on the Somme.

I spent the first 17 years of my life in a French department called Somme where war memorials and cemeteries were extremely common. As regards World War I, this region is best known by the British who lost thousands of soldiers there during the Battle of the Somme; so many that this battle has been nicknamed by French historians “The Verdun of the English”.

Here is a short summary of this battle:
The Battle of the Somme, also known as the Somme Offensive, fought from July to November 1916, was among the largest battles of the First World War. With more than 1.5 million casualties, it is also one of the bloodiest military operations recorded. The Allied forces attempted to break through the German lines along a 12-mile (19 km) front north and south of the River Somme in northern France. One purpose of the battle was to draw German forces away from the Battle of Verdun; however, by its end the losses on the Somme had exceeded those at Verdun. By the end of the war the Allied losses proved replaceable, the German losses less so.
Verdun was an icon that would affect the national consciousness of France for generations, and the Somme would have the same effect on generations of British people. The battle is best remembered for its first day, 1 July 1916, on which the British suffered 57,470 casualties, including 19,240 dead—the bloodiest day in the history of the British Army.

Nowadays it is quite impressive and moving to visit these sites. All the more so as some of these young soldiers were not 18 yet; some of them having lied about their age to join the British army.

Tomorrow we are celebrating the 90th anniversary of the armistice treaty between the Allies and Germany which was signed in a railway carriage in Compiègne Forest and marked the end of this war.