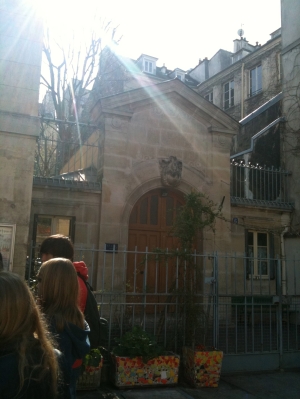 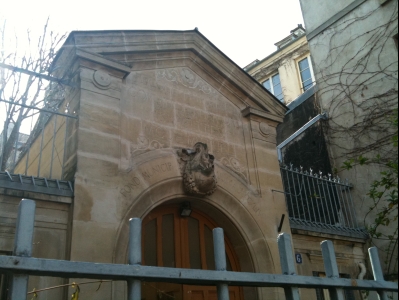 This small school is located in The Pletzl, the Jewish quarter in the fourth arrondissement of Paris. It was founded in 1844 by the city of Paris when it became clear that it was necessary to set up a secular school to cater for the numerous Jewish children who lived in the district.

The École élémentaire des Hospitalières-Saint-Gervais had several unusual features:
– although it was a secular school, it received some funds from the Central Consistory, the institution set up by Napoleon I to administer Jewish worship in France, but religious education was forbidden within the building.
– unlike other French schools, it was closed on Saturdays and Sundays, instead of Thursdays and Sundays, as was the case in all other French state schools.
– it used the Monitorial System of education
– the school was organized for Jewish children but not all students were Jewish. 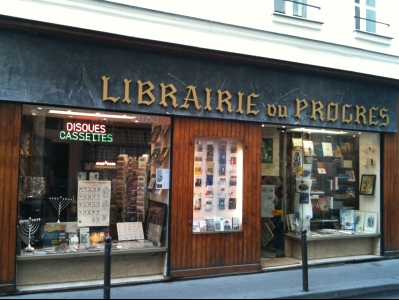 This is the oldest Jewish bookstore in The Pletzl, the Jewish quarter in the fourth arrondissement of Paris.

The BNVCA (Bureau National de Vigilance Contre l’Antisémitisme – the National Bureau of Vigilence Against Anti-Semitism) has just pressed charges against a store which was selling sleeveless t-shirts bearing an anti-Semitic slogan referring to a Nazi-era Jewish ghetto in Poland. They were spotted by a woman on Sunday in the 19th multiethnic district of Paris.

“The inscriptions on the t-shirt read in German “Juden Eintritt in die parkanlagen verboten” (No Entry for Jews in the Park) and in Polish “Zydome wstep do parku wzbroniony,” reproducing a ban to Jews in the Lodz ghetto in 1940.” (European Jewish Press)

The woman contacted France’s anti-Semitism watchdog which advised her to take photos of the tops in the shop window and buy one t-shirt for evidence. The BNVCA also contacted AFP who sent a journalist to the spot.

In France slogans encouraging anti-Semitic or racial hatred are forbidden so the shop-owner – a Chinese man – is bound to be heavily fined, at least. The labels on the tops read “Intro fancy”. So far it seems it has not been possible to identify where the t-shirts were made.

Because of the nauseous character of this piece of news, I have chosen not to illustrate this post. 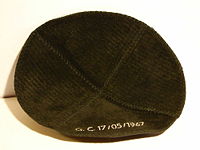 Just when we thought that anti-Semitic attacks in France were on the wane, a seventeen year-old was severely beaten up yesterday by a group of six or seven teenagers in the 19th district of Paris.

The boy was identified by his attackers as Jewish as he was wearing a kippah. He was walking in broad daylight through a neighborhood where many Jewish families live when this happened. The youths attacked him with metal bars, smashed his skull and broke several of his ribs. The young Lubavitch boy was taken to hospital where he is still in intensive care. His state is described as critical.

Police said they detained five people for questioning in connection with the beating. Numerous French politicians were quick to condemn the attack and reaffirm their determination “to fight all forms of racism, anti-Semitism and xenophobia.” While they are right to condemn this cowardly obnoxious attack, I wish they would stop treating racism and anti-Semitism as if they were one and the same thing. It is both inaccurate and completely counterproductive.

Update: Apparently this boy, Rudy, is no longer in a coma.