I went kosher shopping in Antwerp last week where I bought meat for my freezer as well as all sorts of fresh and dry foods.

Yet as I looked around looking for parve cookies and cakes for a friend as well as for a cup of instant noodles for myself. I found that things seemed to be changing as the above photos suggest: no colorings, no preservatives, no trans, less salt, no added MSG …

This is a trend I have not witnessed in French kosher stores and interestingly all those products came from North America, not Israel. As for the organic section (a rather reduced product line), it contained American and European items.

Have you noticed a similar tendency where you live?

I recently interviewed a friend who was born and bred in France and has moved to the Jewish community of Antwerp. The interview was conducted in French and translated by the owner of this blog. Thanks to SuperRaizy for proofreading it.

– Can you introduce yourself briefly?
I am 32 years old, have been married for almost 3 years and have a one-year old daughter.

– Where do you live and why did you choose to live there?
We live in Antwerp, right in the heart of the Jewish district. Leaving Paris for Antwerp seemed quite obvious for two reasons. First, my then future wife had been living there for three years and I was dissatisfied with the level of observance in Paris. Besides, I could not imagine asking my wife to move to Paris where life is so different from anything she had known in either Antwerp or in Amsterdam where she had grown up.

– What do you like best about living in Antwerp?
When you go to Antwerp for the first time you are struck by a number of things. First, the omnipresence of Jewish life; here every day life and Jewish life are synonymous. There is no place for religion as a hobby. Being religious is as natural and as vital as breathing.
Another striking element is the convenience. Hechsherim (religious certifications) are serious and one needn’t question their validity. It is not necessary to check them out. You can buy practically all Kosher certified products.
In addition, there is a wide variety of Jewish communities. Almost all Jewish movements exist here, with a strong emphasis on Orthodoxy – from Modern Orthodox to the strictest of Chassidim.
Finally, Antwerp has a vibrant Jewish community. Unlike other communities in Europe (Paris or Amsterdam for instance), the trauma of the Second World War did not shake the foundations of the “edifice”. Here there is no memorial to a lost world; life is steeped in the present.
In my opinion the strongest proof of the everlasting quality of the Jewish people is to hear children speaking Yiddish as a mother tongue right here in Europe, as if nothing had happened 60 years ago.

– Do you identify yourself as a Chassid?
I studied at a yeshiva in Paris (Yeshivat Yad Mordechai) whose Rosh Yeshiva was a strict Litvak, so I was rather prejudiced against Chassidism. Yet even before I was married I decided to wear a lange rekel (a long coat) and since my daughter’s birth I have been wearing a shtreimel. Then I discovered traditional Chassidic writers and what this movement had meant for the Jews of Eastern Europe. My overall vision of life gradually evolved as I witnessed how Chassidim live their faith in a festive atmosphere, which is joyous without ever being “light”.

– What Chasidic group do you associate with?
Last December I officially became a Makhnovka Chassid. It is a tiny group that has members in Antwerp, New York, London and Bnei Brak where the present rebbe lives. It is an old dynasty which originated in the village of Makhnovka (the former Komsomolske) in Southern Ukraine. Progressively it established ties with other Chassidic groups, particularly Belz, to which the present rebbe is linked via his mother. We have shared the same minhagim as Belz for quite a while now.

– Why did you choose this particular group?
I had been attending the Makhnovka shul in Antwerp for two years when I decided to go and visit the rebbe. I had the time to see if their minhagim and their point of view were for me. The visit to the rebbe in December confirmed what I had been feeling for two years.
Becoming a rebbe-chassid implies accepting him as a guide in all the momentous decisions of one’s life. You consider him to be the person who is able, through his insights into the “secrets” of the Torah and his knowledge of the sacred texts to perceive more truths than the rest of us. At the birth of our next child, im yirtsa Hashem, we’ll ask for his advice on what to name the baby.

This is another photo that was taken in Belgium when I was there a couple of weeks ago. Unfortunately the sky was overcast, hence the grey background.

This is what this advert for the famous chocolate, Nutella, spread says, in Dutch. 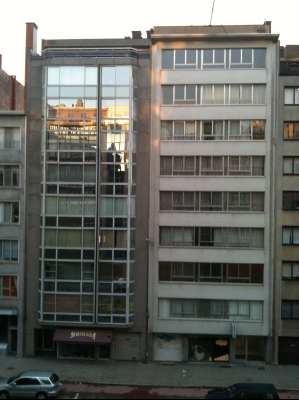 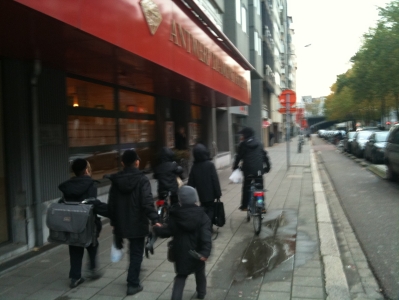 – It is a Belgian city. I have already mentioned how much I like Belgium. As the second largest Belgian city, Antwerp obviously has all the features I enjoy there.

– It has the largest Jewish community in Belgium.

– Walking through the Jewish area of the city feels a little like being thrown back into the sheitls of 20th century Europe.

– People speak Yiddish there in the streets, in the shops; even Indian diamond brokers speak it.

– There are dozens of Jewish stores, big and small. For someone like me for whom buying kosher products is a bit of a hurddle race, walking into those stores felt like being a child in a gift shop.

– The young butcher who served me was friendly and smiling and made me feel like an old customer.

– The linguist in me loves to hear people switch from one language to another. It is not unusual to hear people use three or four different languages in one store.

– We bought a new Chanukiah for the next holiday.

– We have some friends there so it is very nice to get some insiders’ insights into this place (its history, habits, food, …)

– I learned a lot more about Chasidism and feel far less judgemental about it.

Window Views: window, and now doors, from all over the world can be found on Mary’s blog.

This month’s edition of JPIX is up at Leora’s. Make sure to check it; it’s beautiful. 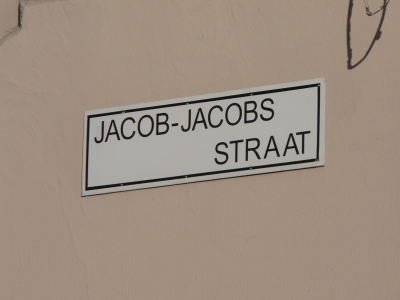 After Antwerp, Dublin, Hungary, Dublin again and Hong Kong, Project Black is back in Belgium.

Thank you Leora for the link.