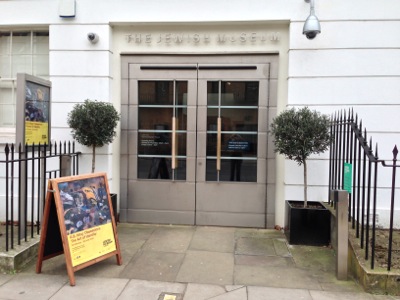 The Jewish Museum in London is the combination of two Jewish museums. One is the Jewish Museum which was founded in 1932 by Professor Cecil Roth, Alfred Rubens and Wilfred Samuel. Originally located in Woburn House in Bloomsbury, it moved to a building in Camden Town in 1994.

The other is the London Museum of Jewish Life which was founded in 1983 as the Museum of the Jewish East End with the aim of rescuing and preserving the disappearing heritage of London’s East End – the heartland of Jewish settlement in Britain. .

In 1995 the two Museums merged but between 1995 and 2007 the combined Jewish Museum still ran on two sites. Finally the museum bought a former piano factory behind the Camden Town site and raised the required funds to combine and remodel the buildings. The new Museum opened to the public on 17 March 2010.

The fist floor of the museum features a gallery entitled ‘Judaism: A Living Faith’, which is devoted to Jewish life through one of the world’s finest collections of Judaica, featuring objects used in all areas of Jewish religious life, in both the public and private spheres.

The second floor gives an insight into British Jewish history from 1066 to the present day. Jews first settled in England in 1066 after the Norman conquest and there were Jewish communities in many towns in the medieval period. However, in 1290 the Jews were expelled from Britain by Edward 1. They were only readmitted to Britain by Oliver Cromwell in 1656. This new community steadily developed until the late 19th century when it increased rapidly with the arrival of some 150,000 Jewish immigrants from Eastern Europe. Many of the newcomers settled in London’s East End, which became home to a vibrant cultural and religious life. Numerous objects in the museum reflect this period.

The Museum’s Holocaust Gallery is made up of items and filmed survivor testimony from Leon Greenman, OBE, an English-born Auschwitz survivor who devoted his life to speaking about his experiences and campaigning against racism until his death in 2008.

The third floor of the building is for temporary exhibitions.

The Jewish Museum in London is a pleasant small-sized museum where you can spend between one and two hours, depending on whether you choose to visit the whole museum or focus on only one floor. It has a kosher café and a shop.