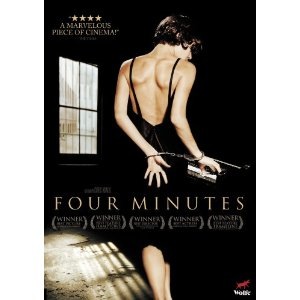 The original title of this German movie is Vier Minuten; it was simply translated into English as Four Minutes. If you are a regular movie goer, you know that the German film industry has released some pretty good films in the past few years – The Lives of Others, Good Bye Lenin and The Hedge of Heaven come to mind. Four Minutess is no exception.

Chris Kraus first got the idea for this movie when he read in a newspaper the story of an old lady who had been teaching the piano in the same women’s prison for 60 years. He imagined an old woman with talent but a guilt-ridden past meeting a violent but gifted inmate. The old lady foresees that the young woman can go far however the latter is reluctant to accept the teacher’s idiosyncracies and rigidity.

Traude sees it as her mission to retransform Jenny into the musical wunderkind she once was. Though generations apart, together these two women struggle to seek a way out of their lockdown lives through an uneasy alliance built around music. Through flash-backs, memories of Traude’s Nazi-dominated past and a doomed lesbian affair with a political activist resurface as she interacts with her volcanic student.

The story is powerful and emotional, so is the soundtrack.