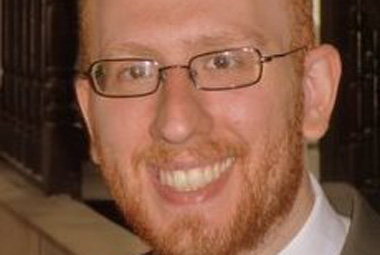 Interviewing rabbis is not easy; we all know how busy they are so when Rabbi Josh Yuter agreed to take part in this new series and replied to my questions, I felt honored. I hope that you will all enjoy this interview as much as I did. Thank you Rabbi for your participation.

Can you introduce yourself in a few words?

My name is Josh Yuter and I have been the Rabbi of The Stanton St. Shul in New York’s historic Lower East Side since 2008. I’ve also worked professionally as a computer programmer primarily with web application development.

I’ve been blogging since 2003, now at www.JoshYuter.com, and I created and currently manage www.JewishGuitarChords.com archive. I have diverse interests, many of which I incorporate into a Jewish context, and I make horrible and often esoteric puns.

Can you tell us about your congregation and/or job?

The community of The Stanton St. Shul is one of the most diverse I have ever encountered, which is quite remarkable due to its relatively small size and being an Orthodox congregation.

Our membership ranges from recent college graduates to seniors who have spent most of their lives in the Lower East Side. We have members who have grown up observant and attended yeshivot and others with virtually no background and who might not be observant in their private lives. On a typical Shabbat you can find someone in a suit and tie sitting next to someone in jeans and a t-shirt, and no one is particularly bothered.

The motto of the synagogue is “all are welcome; all will feel welcome” and the true uniqueness of the community is its ability to live up to this standard.

What is your religious background (if any)? Is there a rabbinical tradition in your family? When and why did you decide to become a rabbi?

My father has been a pulpit Rabbi for most of my life, though I would not categorize him as a “typical” Orthodox affiliated rabbi. For the purposes of this interview I would best describe his approach as “academic” in that religious texts must be understood critically and their interpretations must fit within the rules the grammar and philology. Perhaps more controversial is the formalistic approach to Jewish law which often challenges the accepted status quo and encourages others to do the same.

Being raised in this environment, my initial interests in going to rabbinical school was not professional, but practical. Most of the subjects learned in rabbinical school such as kashrut, Shabbat, niddah, etc. are laws which are relevant to any observant Jew. My intent was to learn the primary sources with the guidance of experts and the accountability of examinations such that at the end of my program I’d feel confident that I’d either know the halakha or I’d be able to find the answer with relative ease.

Where did you study? Any particular reason you chose this rabbinical school? Is being a rabbi very different from what you expected?

For rabbinical school I studied at Yeshiva University, primarily because there were no other options at that time for a “modern orthodox” rabbinical school. YU’s main competition today is Yeshivat Chovevei Torah, but YCT only came into existence in my second year of rabbinical school and there was absolutely no reason to switch. Not only was YCT still in the process of figuring out its full curriculum, but in terms of complete rabbinic training, YU provided a better overall program for future rabbis.

The most significant and underutilized advantage of Yeshiva University is that it is in my opinion the most pluralistic institution of Orthodox Judaism in the world, defining “pluralistic” as the number of different ideologies and approaches to Judaism under one roof. I had the pleasure of studying Talmud in different styles – including “academic Talmud” in YU’s Bernard Revel Graduate School for Judaic Studies and learning halakha from different perspectives. Even if I did not agree with an approach or a conclusion, being exposed to contradictory ideas is crucial for religious development. On a personal level I could be proven wrong in which case I’d correct a mistake or at the very least I’d have a better understanding as to why I would reject one idea over another. Furthermore, such exposure is crucial for anyone to be an effective Orthodox Rabbi since at some point, any Rabbi will have to confront people whose opinions and perspectives differ from his own, and the more one understands how another side operates, the better a rabbi can respond.

Like any job, being a pulpit rabbi can alternate between the frustrating and the gratifying depending on the day. The most gratifying aspects about being a pulpit rabbi for me are times when I can engage with members Jewishly either through teaching classes or simply by being a part of their lives. Obviously this is much more pleasant in better times. I cannot imagine anyone enjoying grief counseling or officiating a funeral, even though to be the religious representative in such a time is less a responsibility than it is an honor.

What sort of misconceptions do people have about your job?

In terms of The Rabbinate in general, people often assume that my synagogue operates like theirs. Meaning, many people assume that the mutual relationship between a congregation and its rabbi are uniform when in truth every community is unique and what might be “normal” for some could be harmful elsewhere.

In my own shul I’ve worked hard to “lift the veil” so to speak about being a Rabbi, or at least how I operate. Part of this is that I think transparency is beneficial and hopefully will preempt misconceptions in the future.

Do you have some sort of contact with rabbis from other Jewish denominations or other religious leaders? Why or why not?

In 2000-2001 I participated in a fellowship program run by Clal which brought together rabbinical students from other denominations, though my exposure since then has been limited to individual colleagues. This is not so much an ideological decision but a practical one. Above all else, my primary focus is, and I think must be, the development of my own synagogue. Even with my Orthodox colleagues on the Lower East Side, we are all preoccupied with our synagogues that we do not have the time to dialogue regularly. However, I have found my local colleagues to be phenomenal professional resources, and I try to provide whatever assistance I can be to anyone regardless of their denomination.

Do you use the Internet in your job? How?

The internet has been instrumental for my synagogue. Given our limited resources, the internet has been the most efficient cost effective method to engage our membership. Between our email newsletter, Facebook, Twitter, we can readily communicate with our membership and our website allows us to reach out to others. The reality is that people, especially those under 35, use the internet as their primary source of information and we have had numerous people who have found our shul simply by searching Google. Getting people in the door is the hardest part, especially if people don’t know you exist.

What are your plans for the future concerning your job and/or congregation?

In terms of the future of the shul, my goal is to continue our sustained growth. As tempting as it can be to simply fill seats, without a sense of community people can leave just as easily. The biggest challenge I see myself facing is being able to reevaluate where we are in the present and to adjust accordingly. We’ve made extraordinary strides in the past two years to the point where it would not be a stretch to say we are a different shul entirely. While it’s a challenge to see the synagogue anew, all things considered, it’s a wonderful problem to have.

18 thoughts on “Interviewing a Rabbi”