A number of illustrious people and families lived in Hamburg over the centuries and are buried in the Jewish cemetery.

When I visited, Inga, a young German student who works as a guide at the cemetery, mentioned one in particular. Thus the famous Glückel of Hameln (1646-1724) was born, grew up and lived in Hamburg until 1700 when she remarried and moved to France. She is called of Hameln (and not of Hamburg) as it is where her husband came from. Although Glückel herself is buried in Metz, a number of her relatives’ tombs can still be seen today. 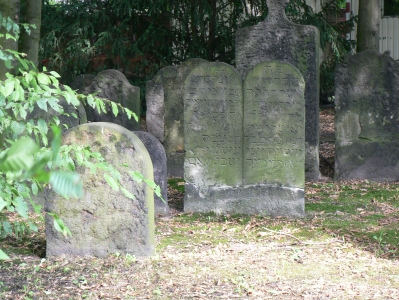 Mordechai’s tombstone in the middle

Mordechai, her maternal uncle, who died of the plague is interred there and his tomb is easily identifiable as it faces the other way so that people could see what he died of.

Glückel’s grandmother’s tomb – this lady was called Mata – stands near Mordechai while her own daughter’s tomb is just in its front.

Little Mata’s tombstone, with Glückel’s grandmother’s behind on the left

Here is what Glückel wrote in her memoirs about her daughter’s death:

My daughter Mattie, peace unto her, was in her third year, and a more beautiful and clever child was nowhere to be seen. Not only did we love her, but everyone who saw her and heard her speak was delighted with her. But the dear Lord loved her more. When she entered her third year, her hands and feet suddenly swelled. Although we had many doctors and much medecine, it suited Him to take her to Himself after four weeks of great suffering, and left as our portion heartache and suffering. My husband and I mourned indescribably and I feared greatly that I had sinned against the Almighty by mourning too much, not heeding the story of Reb Jochanan, as will follow. I forgot that there were greater punishments, as I was to find out later. We were both so grieved that we were ill for some time.

Her husband – Chaym – died in 1689, and Glückel, who had already been involved in his business, took over and managed it by herself.

More about Glückel and her family here.