Pottery that belonged to Sephardic Jews

Like in Amsterdam, the first Jews to settle in Hamburg were Portuguese and Spanish conversos in the 1580s. They were merchants and at first were welcome because of their commercial connections in the Spanish and Portuguese colonies, where other conversos had settled.

When it became clear that they were Jews who practised their religion, some of the citizens demanded their expulsion, but the city council, pointing to the economic benefits increasing from their presence, opposed the measure. Some of these settlers took part in the founding of the Bank of Hamburg in 1619. 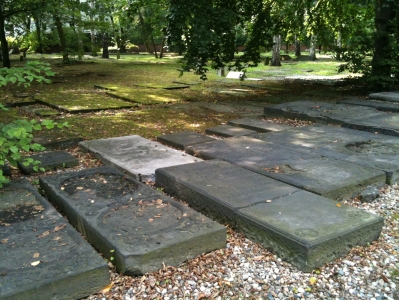 In 1611, the Jews of Hamburg acquired a plot of land in Altona (jst outside the city bounds then) to be used as burial grounds. This cemetery was closed in 1869 along with all the cemeteries in the inner city of Hamburg. Because of its hstorical significance this burial place was officially classified in the UNESCO World Heritage List in 1960 and is open to visitors three afternoons a week.

14 thoughts on “Jewish History in Hamburg (part I)”