In just over a week we’ll be listening to the story of Queen Esther read from Megillat Esther (the scroll of Esther). A lot has been written about this story and the holiday that celebrates the miracle behind the story; one thing that strikes me is the relevance of this narrative.

When Haman is appointed Prime Minister by King Ahasuerus, he expects everybody to show him respect and deference and feels slighted when Mordechai refuses to bow to him. In a pure reflex of anti-semitism, he decides that not only Mordechai but all the Jews of Persia must perish as a result. In addition, king Ahasuerus, who apparently had nothing against the Jews, does not challenge his minister and is ready to stand indifferent while the Jews of his kingdom are being slain. Unfortunately history has repeated itself countess times since then. Jews have been threatened and killed while their neighbours have stood silent.

The brighter aspect of this story is that redemption comes from the apparently assimilated Queen Esther herself. After all she had married king Ahasuerus – a Gentile – to whom she had not disclosed her true identity. What’s more the circumstances which had led to the match – she had found favor in the king’s eyes in a sort of beauty contest – were not exactly those we associate with religious young girls.

Although marrried to an allpowerful king and hesitant when Mordechai tells her that she is the one who must take action to save her people, she identifies with the Jews of Persia and finds in herself the resources to counter Haman’s decree.

What the story of Esther teaches us here is that sometimes God needs us to perform miracles and that he expects us to exert our sense of responsibility to change things. It also reminds us that we should be careful when judging other people and that redemption may come through those assimilated Jews we tend to write off as “not Jewish enough”.

Photo Memes:
– Red in the House for Ruby Tuesday
– Tea for Sepia Scenes

A short review of The Garden of Beasts

I had a few problems with my car

A new museum in my area

Traditional Hamantaschen, a recipe for Purim

Leora announces Purim with a painting but also reminds us that a year ago eight teenage boys were murdered at the Mercaz Harav Kook yeshiva in Jerusalem. You can read a very moving letter from one of the boys’ mother at Aish.

Oh, Nuts is donating delivery of a free Purim gift basket to a lucky reader of Mom in Israel’s blog.

Frum Satire wonders what his readers think of Open Orthodoxy

Robert Lewis Balfour Stevenson was born in 1850. He was a sickly child who was often confined to his bedroom. As a result he longed to travel and as a young man made frequent visits to France.

In 1876 he undertook a voyage along the Oise River from Belgium through France with his friend Walter Grindlay Simpson. Each man had a wooden canoe rigged with a sail, comparable in style to a modern kayak. The canoes were narrow, decked, and paddled with double-bladed paddles – similar in fact to the photo above.

In 1873 Stevenson published An Inland Voyage a travelogue about his canoeing trip. It was in fact his first published work.

This voyage is still remembered today in the region in a tiny museum near my hometown. This museum opened last summer and mainly contains one person’s collection. Marie-Jeanne Delville was born between the two world wars. Over the years, the former seamstress has collected thousands of every day life objects such as irons, washing machines, sewing machines, children’s toys, postcards and clothes. Recently she gifted her collection to her village and a museum was opened to host it.

Because Stevenson traveled in the area, the people who set up the musem decided to include his voyage in the building. I haven’t read An Inland Voyage, although I would love to now, but I enjoyed Stevenson’s novels when I read them. My favorite is The Master of Ballantrae. What is yours?

For those who wonder why the spelling of Stevenson’s name at the beginning of the post is different from what they read on book covers, here is the explanation: at about 18, Stevenson changed the spelling of ‘Lewis’ to ‘Louis’, and in 1873 he dropped ‘Balfour’. (Wikipedia) 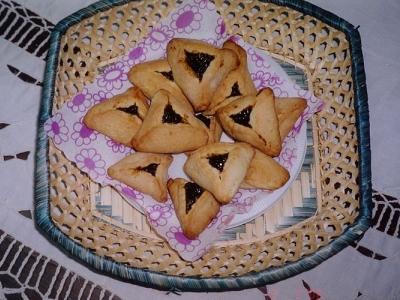 In a large mixer, beat together the eggs, oil, sugar, vanilla and almond extract. Add baking powder and flour until you get a workable dough. If dough is too wet, add more flour.
Divide dough into quarters. Toll to ¼-inch thickness on a lightly floured surface. Cut into 3-inch rounds. Reroll scraps. Place the filling of your choice in center of each dough round. Fold three sides up to form a triangle, leaving some filling exposed in the center.
Place cookies 2 inches apart on greased cookie sheets. Preheat oven to 350 degrees. Brush with egg wash if desired (see yeast dough recipe). Bake for 15 – 17 minutes or until crisp. Transfer to a wire rack to cool.

This recipe is easy and quick. I found it a few years ago on the Aish website.

Mary The Teach has created a new meme, Sepia Scenes. Click here to join in or learn how to apply a sepia tone to a photograph.

The latest edition of kcc (the kosher cooking carnival) is up at Batya’s, check it out and you’ll find some lovely recipes.

Last summer we renovated two rooms, both of which contain red.

I bumped my car. On Saturday evening I went with some friends to the restaurant and as I left the car space after the meal I didn’t notice a piece of marble on the ground and really damaged the car. I obviously had to phone the insurance which was quite something since I wished to contact a real person rather than a voicemail system. It took me ages but I did manage to talk to a real human being in the end.

I played with my new toy (see photo above). I got this for my birthday and since I had no unknown place to go to I used it to visit my parents yesterday – with another car obviously. I know it’s pretty stupid but I wanted to check the settings I had chosen.

Yet now that I have to wait for the car to be repaired and because of the unplanned cost I will defintely spend the holidays here.

Ny mob hit man Paul Schuman is presented with the following deal: he will be sent to jail unless he accepts to asassinate one of Hitler’s most important ministers during the 1936 olympics. Since he doesn’t really have the choice he leaves for Berlin but, even before he can fulfill his mission, he becomes the prime suspect in a murder.

The title is a reference to Tiergarten, a large park in the centre of Berlin, but also to what Hitler’s Germany had become in 1936. This novel is a page turner and one I would recommend to people who love thrillers as well as to those who enjoy historical novels.

The new edition of Haveil Havalim is up at Sarahs View; Sarah blogs from Australia.