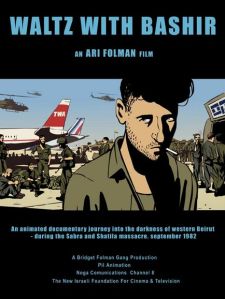 After Lemon Tree a fortnight ago, Waltz with Bashir is on at our local movie theater.

Twenty-four years after Ari was a soldier in the IDF, he is contacted by a friend who wants to tell him about a recurring dream he has connected with the 1982 Lebanon War. Later that night, Ari himself has a vision about the Sabra and Shatila massacre – a vision he cannot understand. At that point he realizes that he remembers virtually nothing about that event and, following a friend’s advice, sets off on a quest to rebuild his memories.

Thus Ari meets up with former friends and fellow soldiers, but also with a psychologist and the reporter Ron Ben-Yishai so as to understand what happened there and why he can’t remember it.

This film’s format is original in that it is a documentary movie – with real interviews of the people concerned – made by the means of animation. It combines classical music, rock music, realistic graphics and surrealistic scenes together with illustrations similar to graphic novels. From an artistic point of view the film is a tour de force.

What’s more, to quote a famous website, I’d be tempted to say that only in Israel can people try and address their feeling of guilt relatively shortly after the event and in such an honest way.

4 thoughts on “Another Israeli Film”